While only 28% of women have come across the term before, the vast majority have encountered "mansplaining"

“Mansplaining”, as defined by Merriam-Webster, is “when a man talks condescendingly to someone (especially a woman) about something he has incomplete knowledge of, with the mistaken assumption that he knows more about it than the person he's talking to does”.

The spiritual origin for the term is often regarded as being author Rebecca Solnit’s 2008 essay entitled “Men Explain Things to Me” (although Solnit herself did not explicitly use the word, the first known source for which was posted in the comments section of a LiveJournal article a few weeks after the essay’s publication). 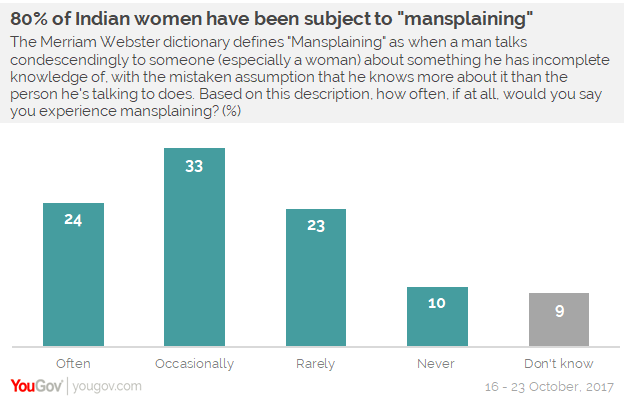 The results also reveal that recognition for the term itself lags far behind the experience of it. Only 28% of women said they know what “mansplaining” is, while a further 17% have heard of or read the expression but don’t know what it means.

Who are the most likely mansplainers?

Male friends are the most likely mansplaining culprits, with 32% of women who have experienced mansplaining saying that they have endured it from their male friends.

Other common offenders include male work colleagues who are more senior (31%) or on the same level (22%) as the women in question, partners/spouses (30%) and men on social media (27%). 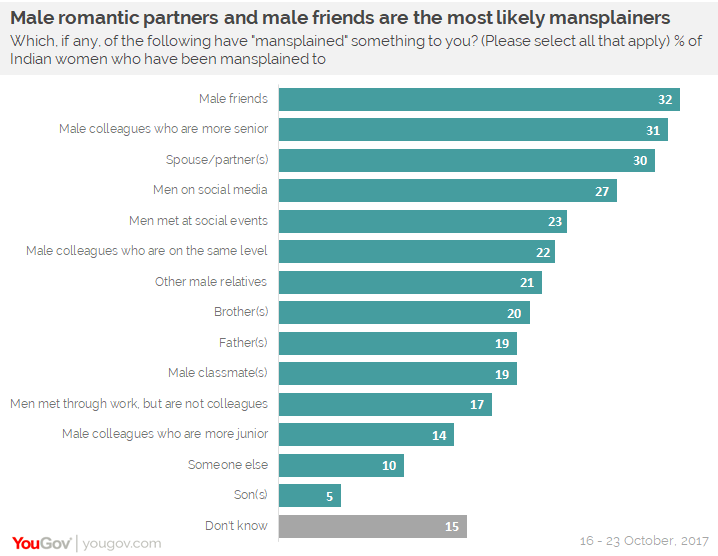 Data collected online by YouGov Omnibus between 16 and 23 October 2017 among 406 female respondents in India. Results are representative of the adult online population in India.