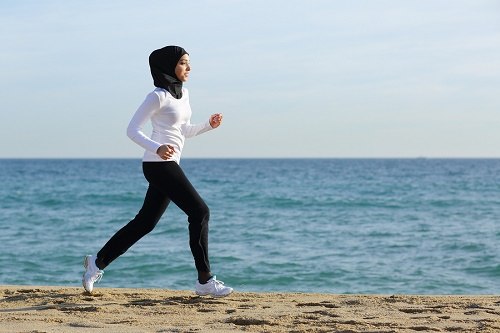 The majority of adults are happy with their weight and body image, and body confidence tends to mature with age, according to a new global study from YouGov.

Based on adults surveyed across twenty-five countries, it seems that greater age brings greater body confidence. In nearly all countries surveyed there is concern that celebrity culture undermines the body image of young people.

For the US, Australia, and most of the European and Asia Pacific countries surveyed older people are significantly more likely to be happy about their body shape than those in their twenties and thirties. In the US 55% of millennials (18-34 year olds) are comfortable with their own bodies compared to 61% of those aged 55+.

The pressure to remain chic, however, seems to have taken its toll in France, which is the only European country surveyed where young people are more confident of their looks than the middle aged and older. 68% of French 18-24 year olds are happy with their looks compared to just over half (55%) of those aged 55+. For the UAE, Egypt and Mexico younger people are also more likely than older to be satisfied with their looks.

Men in general are more positive about their weight and appearance than women. Only in Saudi Arabia are women more comfortable with their looks than the men with 74% of Saudi women claiming they are happy with the way they look compared to 70% of Saudi men.

Women in Hong Kong are the least body confident with only 44% claiming they are happy with their appearance compared to 55% of Hong Kong men. 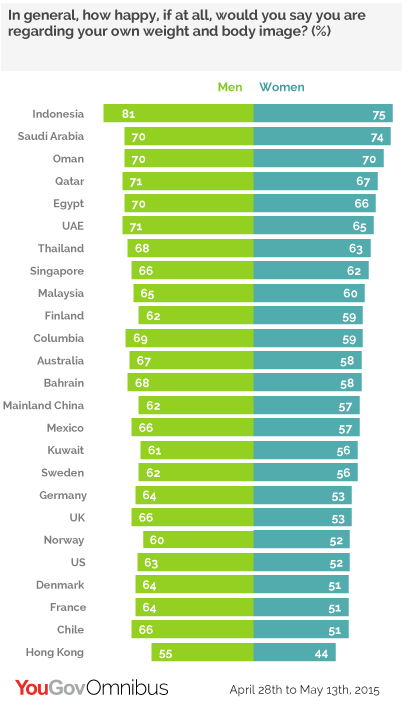 In seventeen of the twenty-five countries surveyed more than half of responders think that celebrity culture has a negative impact on young people.

The Scandinavians and British have the most negative view of the potential impact with more than three-quarters of Swedish responders (77%) and 74% of Brits believing that celebrity culture has a detrimental impact on young people’s body view; only 10% in Britain and 6% in Sweden think it might be positive.

In general the countries surveyed in the Middle East and Asia Pacific have a more positive view of the impact of celebrity culture on young people. Around a third in the UAE (34%) and Qatar (31%) think celebrity culture can have a positive effect, along with 41% in Mainland China and over one in three (34%) in Malaysia and Thailand.

All figures, unless otherwise stated, are from YouGov Plc.  Total sample size was 22,140 adults worldwide*. Fieldwork was undertaken online using YouGov's Omnibus service between April 28th and May 13th 2015. The figures have been weighted and are representative of the online adult population in all countries (aged 18+).